Alex and I woke up fifteen years ago today in Nevada, a few hours’ drive from our final destination of San Rafael, California. My first thought, though, was to play some roulette.

All across the country I had been planning to place a single five-dollar bet on the number 28 when I got to Nevada. Why 28? Because 28 is perfect.

A perfect number is a mathematical curiosity, of interest mainly to math nerds. It’s any number that is the sum of its factors (excluding itself). The factors are all the ways you can divide the number into integers. So 28 can be divided by 1, 2, 4, 7, and 14; and 1+2+4+7+14=28. Very few numbers are “perfect.”

Like all the other motels I stayed at during this trip, the management would not permit me to leave Alex unattended in the room while I went to one of the tiny casinos along the main street of Winnemucca. So I found a place to park in the shade and left her in the car while I ducked into a saloon-style casino, bought a single five-dollar chip at a roulette table, and placed it not on 28, but on 14.

When I left Pittsburgh with Alex, Andrea and I had been together for three and a half years. We agreed that she would follow me to California some indeterminate amount of time later, after I’d had a chance to settle in and find us a place to live. But would we stick to that plan? I was severing my ties with Pittsburgh; Andrea was not. Moving clear across the country was an almost irresistible opportunity to make a fresh start. When would Andrea feel ready to move — in a month? A year? Would I still be the same person she bade farewell in April? Would I have moved on? Would she?

These thoughts were ever-present as I headed west all week. I fully expected to arrive in a place full of tanned, blond beauties, and that thought was ever-present, too. Who would I be — the swinging bachelor, or the committed boyfriend? Who was I? 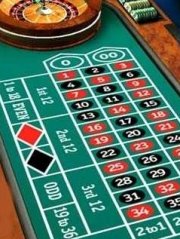 On the spur of the moment, in a tiny casino in Winnemucca, without even realizing I was doing it, I chose. 28 was my number, just as a swinging single lifestyle was my fantasy. But 14 was a number that Andrea and I shared. It’s the day each month that she and I celebrated our menseversary.

I placed my bet on 14. On sharing my life with Andrea.

The wheel spun, the ball bounced. It landed… on number 28.

I spent the rest of the drive — through Reno, into the Sierra Nevada, past Tahoe, and down into the Sacramento Valley — cursing myself. What had I done? The plan was 28. It had always been 28! There went a hundred and seventy-five dollars I could have had, free — not to mention an infinitely more valuable opportunity to polish my “Mr. Lucky” cred and enlarge my legend. What on earth could have made me change my mind so unexpectedly? What interfered with my plan?

I wrestled with this over the following weeks as I settled in to life in California, and slowly it dawned on me: this is what love does. You can try to control the way your life unfolds, but that’s just an illusion. A seductive illusion, to be sure — easy money, like the hundred seventy-five I didn’t win. But if you always insist on controlling your life, you renounce the incidental, the random, the serendipitous. You miss all the interesting stuff that you can’t possibly anticipate. Life is what happens to you while you’re busy making other plans. Though it hadn’t gone when or how I’d expected it to, somehow I’d found the right person for me.

Alex and I passed up the turnoff for highway 37 (which led more directly to San Rafael), intent on riding I-80 to its very end. We crossed the Bay Bridge, wended our way through San Francisco, crossed the Golden Gate, and took 101 up to the Freitas Parkway exit, as I’d done back in February. We walked into Z-Code late in the afternoon to a very warm welcome. At Dan’s signal I let Alex off the leash and she tore across the wide-open lobby area, a black and tan blur, greeting all my new co-workers for an instant apiece before racing to explore more of her exciting new environs. A short time later we followed Dan to his house, where a guest room was ready for me and Alex.

We lived there for a few weeks, then found our own place. A few weeks later, Andrea left Pittsburgh, had her own cross-country odyssey, and joined us in California — the rest is history. My doubts had disappeared. Who was I? I was the steadfast guy, the committed boyfriend.

Perhaps I had found myself after all.

2 thoughts on “A boy and his dog, part 7: Winnemucca to San Rafael”