A short distance outside of Salt Lake City, en route to Winnemucca, Nevada, I pulled over to the side of the road in order to investigate the fascinating salt flats we were passing. It was moist and squishy! (As you’ll see, it was not the only moist and squishy stuff we encountered on this leg.) Alex was unsure of her footing and didn’t want to explore much. I wondered if the squishy stuff we were standing on tasted like salt. I almost tried, but chickened out. 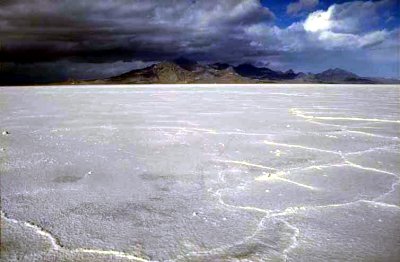 With one glance back to marvel at the Salt Lake City skyline against the majestic backdrop of the Wasatch mountain range, Alex and I resumed our drive, crossing before long into Nevada — and an honest-to-goodness western desert. Once again I had to stop the car to tread upon the unfamiliar terrain, appreciating the tiny puffs of dust I kicked up with each step, cowboy-like. As we continued on our way, we saw tumbleweeds — tumbleweeds! — tumbling by, and an enormous migration of yellow butterflies crossing the highway.

A short time later nature called and I was obliged to pull into a rest stop. It consisted of a roughly rectangular patch of packed-down desert dust, with a few parked cars surrounding a solitary outbuilding. The only thing leading to or away from that spot was the highway itself. Where were the power lines supplying the rest stop? Where was the plumbing? There was no sign at all of any utility infrastructure existing below the desert floor.

Sure enough, the restroom had neither electricity nor plumbing, other than a cistern that permitted a trickle of water for hand-washing. A skylight let in more than enough sunshine so that there was no need for electric lights. (I shudder to think of what it would be like at night.) And the toilet was mounted atop an enormous pit — at least, it seemed enormous from my cursory inspection. I didn’t examine it too closely. It was my very first experience with a composting latrine. Undoubtedly this place saw plenty of use, so there should have been unmentionable amounts of filth in it. But to my surprise, the foul odor I would have expected to be wafting from it didn’t exist. Instead, the air that intimately caressed me as I sat in quiet contemplation was delightfully cool and fresh. Incredible!

The bathroom wasn’t disgusting, but I wasn’t getting off so easy. As I strode out of the restroom I was amazed to see a multihued layer, at least a quarter-inch thick, of smashed-yellow-butterfly goo coating the leading edges of my car. Bleah.