In the spring of 1989, Andrea and I had just moved in together, and her dog Alex, still a rambunctious puppy, was a terror. She chewed through books and shoes by the dozens, and even the carpet of the apartment we rented. She refused to be housebroken. She routinely escaped into the perilous streets of Pittsburgh. She filled Andrea’s car with barf and pee. She barked her head off day and night. Our occasional sincere attempts to integrate her more fully into our lives usually ended with her sinking her needle-like puppy teeth into the skin of my hands.

Andrea, who had adopted Alex on an ill-advised whim and whose lifestyle at the time did not equip her properly to care for a puppy, had already once given Alex away in exasperation, to the shelter where she’d first adopted her. She repented of that decision within just a couple of hours and together we returned there to re-adopt Alex. Now, a few months later, it was I who’d had enough and persuaded Andrea that Alex would be happier in a more rural setting, where she could run and dig and bark to her heart’s content. We found an animal shelter in Washington County, about an hour’s drive away, where we took Alex and left her to be adopted by more suitable dog owners.

We wept silently all the way back to Pittsburgh. The several days that followed were unbearably quiet and empty without Alex’s maddening antics. On the fifth day, Andrea happened into a conversation at work with someone who knew the animal-shelter business, and who informed Andrea to her horror that shelters destroy animals who fail to be adopted, typically after a week.

A feather would have been enough to give us the push we needed to change our minds about Alex; this news was a shove. At once we were on our way back to Washington County and a joyful reunion with Alex, whom we adopted for a third time. We promised to be better dog parents and never to leave her again. 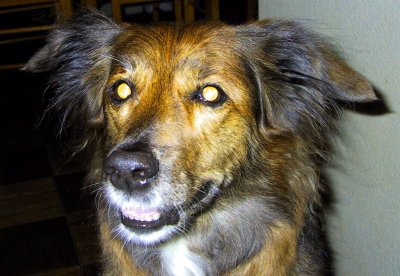 We kept our promise in spades. Obedience school finally taught us how to interact with Alex the right way and, before long, the rambunctious terror was gone, replaced with a full-fledged member of the family. By our caring for her and being cared for by her in return, Alex taught us how to be a family, a set of lessons and values that serve us right down to the present day.

There followed eighteen more years of amazing adventures and travels, love and play, worry and relief, loyalty and companionship. She reached an age that astonished the staff of her vet’s office. But a decline that began in earnest about a year ago finally reached a point where we judged her discomfort was almost continual, and her remaining capacity for joy almost all gone.

This afternoon, Andrea and I cradled Alex in our laps on our front lawn as her doctor made her first and final house call. We all wept, the doctor too, as Alex saw and heard her last. What she heard: declarations of love and praise, heartfelt assurances and farewells. What she saw: the faces she has loved best her whole life, smiling through tears, in the shade of a leafy green tree under a blue summer sky.

In nineteen years there has never been a time that Alex didn’t know exactly what was going on, and she never permitted so much as a toenail to be clipped without letting us know how she felt about it. Alex spent her last hour in a reverie of affection, happier than we’d seen her in a long time, and went calmly and at peace. Would that it could be as easy for the heartsick survivors. 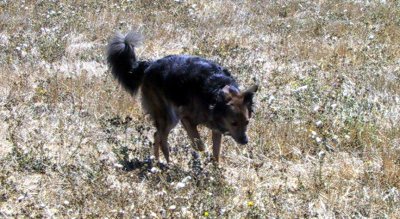