Skip to content
The greatest thing my parents ever did for me was allow me to attend Hunter College High School after I took and passed the entrance exam. It meant letting me ride the subway alone for forty-five minutes each morning and afternoon from the time I was a scrawny and unstreetwise not-yet-twelve-year-old.

At the time I appreciated their confidence in me; but it wasn’t until I became a parent myself that I understood the effort of will that must have been involved. The natural parenting reflex is to permit no risks at all; recognizing that some risks are necessary for growth requires consciously overriding that reflex. As I tell my kids whenever they’re about to get a shot at the doctor’s office: being brave doesn’t mean being unafraid, it means doing what you have to do even though you’re afraid. Faced with that decision in 1978, my mom and dad showed tremendous bravery. Keep in mind this was the bad old days of New York City in the insolvent seventies, the city at its grimiest, most broken-down, and most crime-ridden. Under the same conditions, would I let an eleven-year-old Jonah or Archer venture from Queens to Manhattan alone each day by subway when there was a perfectly good high school just a couple of blocks away? The answer would be, “Of course not,” if it hadn’t been for the example of my parents.

The lesson I learned from them received a boost from the film Finding Nemo, which is superficially a comic undersea adventure but which is really about overprotectiveness.

The movie has a lot to say to parents about the dangers of sheltering kids from the risks and wonders of the real world, and coping with the unavoidable worry that entails. It teaches that worry is an inextricable part of parenthood, which is a comfort in a way. Thanks to Finding Nemo, when I encounter a worrying situation in my role as a father, I cope a little better. I know that it goes with the territory, that it’s universal, and that there’s a right way to deal with it. This is the mark of a well-told story: it addresses an aspect of the human condition and helps make sense of the challenges and complexities of life. Its lessons can be put to practical use, even if they’re nothing more than how to handle a difficult emotion. As long as language has existed, people have used storytelling as a guide for living.

So I was disappointed to read that our friend Vicky thinks that Pixar‘s movies “aren’t interesting if you’re above the age of nine or so.” To her, they’re colorful and diverting and not much else.

It grieves me to think that she and others like her saw The Incredibles unaware of its affecting subtext. As that film opens, two superheroes, Mr. Incredible and Elastigirl, get married — just as a wave of lawsuits by ordinary citizens against superheroes drives the “supers” underground. Most of the film takes place fifteen years later, when Mr. Incredible has a suburban house, an economy car, a terrible insurance-company job, three kids with Elastigirl, and a life of quiet desperation, longing for the glory days. Occasionally he sneaks out with his old superhero buddy to perform some good superdeeds. The deception threatens to destroy his family.

In the story, the timing of the lawsuits that end up criminalizing superhero activity is a coincidence, coming as they do right as Mr. Incredible and Elastigirl get married. But in storytelling terms it’s anything but. For The Incredibles does not merely take place while its protagonists are middle-aged; it is an allegory about middle age. In our youth we develop and employ those attributes that attract attention, friends, and the opposite sex, and bring us glory — our superpowers. If happiness is “the exercise of vital powers,” then these are our happiest times. The moment we get married, though, those powers are promptly embargoed. They may no longer be used. They are driven underground, and we must learn to live without that part of us that made us happiest, even though the powers still lurk tantalizingly just beneath the surface. Many people fail at learning to live like this, which is where infidelity and mid-life crises come from. 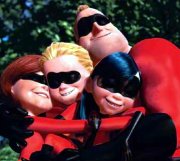 Marriage and family are not without their compensations, however, in real life and in the film, where together, Mr. Incredible’s family is an even more formidable force against evil than Mr. Incredible ever was alone. Events lead to the middle-aged couple suddenly finding themselves costumed and battling bad guys together again. At the first lull in the action they fall into each other’s arms and proclaim, “I love you.” They have rekindled the spark of what attracted them to each other in the first place. The Incredibles teaches middle-aged couples the important real-life lesson that with luck and a supportive partner, the way to avoid pining for the glory days is to make these be the more-glorious days. All we have to do is trust each other to use our “powers” responsibly and we can thread the needle of remaining superpowered within the confines of family life — we can be sexy and committed. Everyone knows a supercouple or two like this.

Now, our friend Vicky is smart, beautiful, funny, a talented chef, and many other things besides, but there are two things she is not: a parent, and middle-aged. She may not be ready for the messages in Finding Nemo and The Incredibles. I can hardly fault her for that, because of my own experience with It’s a Wonderful Life.

Somehow I managed to miss It’s a Wonderful Life throughout my entire childhood, even though — being out of copyright and therefore free for TV stations to air — it was broadcast about a hundred times each Christmas season, and I watched lots of TV. When I finally did see it, it was at age 19 in a college film class. At that age I could not help but identify with the young George Bailey, who was full of dreams about tremendous accomplishments. Time after time these dreams are thwarted, and in the end he has traveled nowhere, built no great bridges, amassed no fortune. Worse, he had to watch from the sidelines as his old friends and even his brother did do all these things. It was the most depressing movie I’d ever seen, and for the life of me I couldn’t comprehend the film’s devotees who found something happy in that tacked-on, insincere ending. What could George Bailey have been so deliriously joyful about, crammed into his living room surrounded by all those yokels? For weeks afterward, George’s desperate, bitter plea just before surrendering to a life of domesticity rang in my ears: “I want to do what I want to do!”

It was only a couple of years later that I saw It’s a Wonderful Life again, a little more mature, and was ready this time (for whatever reason) to receive its message in the spirit intended — and how! At the end of the film, my eyes strangely would not stop leaking. I was filled with a spirit of selflessness and community. And I was amazed at how much I could have changed in so short a time as to have the polar opposite reaction from my prior viewing of the film.

Just wait, Vicky. If Pixar’s movies don’t resonate for you yet, they will, in time.

2 thoughts on “It’s an Incredible Life”